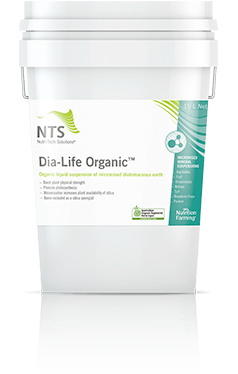 Silicon, the cell-strengthener, is the missing link in many fertility programs, and can be a spectacular yield-builder.

Dia-Life Organic™ is based on a micronised diatomaceous earth, which contains 90% (approx.) silica in amorphous form – unlike quartz crystal, there is no risk of associated health problems. Diatomaceous earth (DE) consists of the microscopic, fossilised, chelated remains of diatoms – single-celled aquatic plants. A large part of the plant response is based on silicon, but DE also contains a broad range of micronutrients. Silicon also plays a role in photosynthesis and acts as a general tonic. Recently boron has been identified as a silica synergist, so this formula contains boron at around 0.70%.

“I wanted to pass on my compliments and thanks for the great customer service you provide... If there is ever a choice now between an alternative product supplier and NTS, I will now always go with you, due to your quality of product and excellent customer service.” – Bridie McLennan

“I was simply astounded at the results. There was a massive fruit set … we harvested 250% more fruit than the previous season and fruit size was just as good as other years.” – Peter Cochrane, Cowra

“Instead of the typical hard crust, the soil became moist and friable, and the smell was fantastic – I know there is a long way to go with this soil, but changes are already happening. Who would have thought I’d be seeing worms back in my soils again so soon!” – John Traill, Liverpool Plains

“I now believe that this is the first time I have seen genuinely healthy mango trees. These trees are now firing along with fantastic flushes even though they are still sitting in water. I just can’t believe it. I didn’t think it was possible.” – Robert Pucciarmati, Dundee Beach

“The trees were incredibly healthy and far more balanced than in previous seasons. There was less nitrogen sponsored wood growth resulting in a 75% reduction in pruning requirements and even the weed pressure has decreased significantly.” – Peter Cochrane