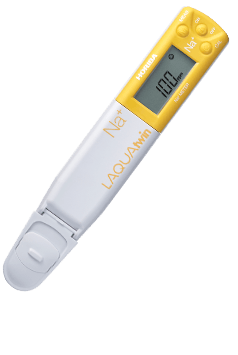 The Plant Sap Sodium Meter accurately measures the amount of sodium in the plant at any stage of the crop cycle.

The increasing salinity of many irrigation sources and the buildup of sodium through the use of high-sodium chemical fertilisers can sometimes create plant health problems. The sodium meter can identify any potential problems at the onset. If sodium base saturation percentages exceed potassium base saturation in the soil, the plant will begin to take up sodium instead of potassium. The Plant Sap Sodium Meter, used in conjunction with the Plant Sap Potassium Meter, allows early diagnosis of these problems to facilitate rapid correction.

“I wanted to pass on my compliments and thanks for the great customer service you provide... If there is ever a choice now between an alternative product supplier and NTS, I will now always go with you, due to your quality of product and excellent customer service.” – Bridie McLennan

“I was simply astounded at the results. There was a massive fruit set … we harvested 250% more fruit than the previous season and fruit size was just as good as other years.” – Peter Cochrane, Cowra

“Instead of the typical hard crust, the soil became moist and friable, and the smell was fantastic – I know there is a long way to go with this soil, but changes are already happening. Who would have thought I’d be seeing worms back in my soils again so soon!” – John Traill, Liverpool Plains

“I now believe that this is the first time I have seen genuinely healthy mango trees. These trees are now firing along with fantastic flushes even though they are still sitting in water. I just can’t believe it. I didn’t think it was possible.” – Robert Pucciarmati, Dundee Beach

“The trees were incredibly healthy and far more balanced than in previous seasons. There was less nitrogen sponsored wood growth resulting in a 75% reduction in pruning requirements and even the weed pressure has decreased significantly.” – Peter Cochrane